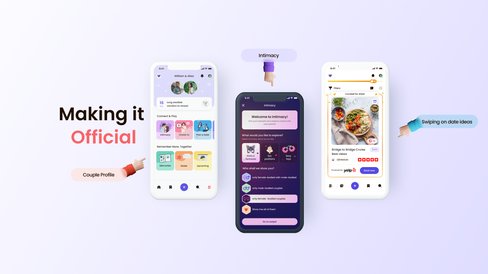 Online dating is more popular than ever, with over 40% of heterosexual and 60% of homosexual relationships beginning online, resulting in a $5B industry within the USA. Yet that’s nothing when compared to the rest of the dating market. Gen-Z alone spent over $11B going on dates in 2019. It’s estimated that the average American will spend almost the same amount on college as they will on dating in their lifetime ($121k).

That’s why Official is here. We recognize this shift in dating, and while there are plenty of platforms out there that help someone find a partner, there are none that help a couple stay together. Our app is designed to help couples have more fun, have better sex, and enjoy the little things in their relationship because we know how important it is to love.

After doing research in the dating space, both literally and by using the typical dating apps in New York, Zac, like many others, realized that dating apps were not the greatest. From a user perspective, it felt gamified and more like entertainment rather than helping me find someone special. From a business perspective, Zac realized that dating apps are the only companies in the world that are designed to lose their clients.

That is when Zac knew something was wrong; what great business is built by losing your customer? Why not try to keep the customer? What comes next?

This simple question led him to change his entire life and leave his cushy job as a VC to become a founder of a consumer social app, one of the most demanding and most challenging companies to create due to their unique social fads, norms, and intricacies. Yet Zac knew he didn’t have a choice, he wanted to build a company that helped people stay together; instead of finding each other, he wanted to make the first dating app designed to be kept and change what it meant to have a dating app.

From then on Zac knew his mission would be to help couples have better relationships, because whats more fun then spreading love?

Meet Zac Stern, a young visionary with a keen mind in business and love.

Earning a coveted spot at the NYU Stern School of Business was just the beginning of Zac's early success. While still in school, Zac interned at UBS, AIG, Stifel, and Rosecliff Ventures. After realizing that he enjoyed the world of startups, he worked full-time as a VC his Senior year at Stern and was promoted to associate upon graduation in 2020. At the same time, Zac founded an angel investment group with three other friends called O-Ventures, which raised over $1M and funded various top companies within the consumer space.

While working as a venture capitalist, Zac got to see Innovation firsthand and realized after seeing the 50th pitch deck for a dating app that the matchmaking market was oversaturated. Still, no one was looking at what came after the match.

With an ear toward opportunity and a desire to fill an unmet need, Zac went right to work building an app so everyone could have better relationships. Official was born, a next-generation social media app built to help couples have healthier and happier relationships. After being honest with his employer about moonlighting with his project, Zac was congratulated by being flat-out fired. This proved to be a gift, as Official became his sole focus as of October 2020.

After being interviewed by the Mayor of Miami and going viral on TikTok, Official's beta crashed from too many people mobbing the platform. After taking the feedback and putting out an MVP In July, the app once again was overrun with over 85k people signing up for the platform In a week., putting the app at #5 within the US on Apple's Lifestyle Charts.

The team raised from top Investors such as Global Founders Capital, Gaingels, and various notable angels, bringing the funding to 750k.

Official
The first dating app designed to be kept.

You must be signed in as a media user to .
Sign Up today to interact with Official and hundreds of other media-ready brands.