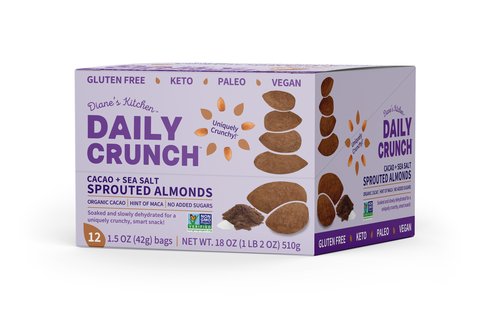 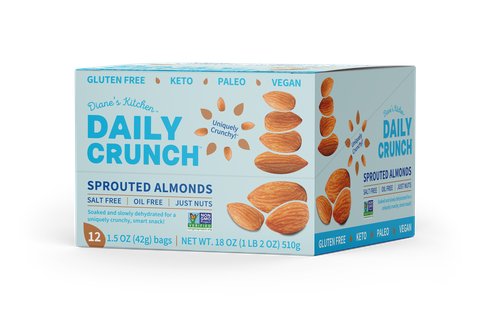 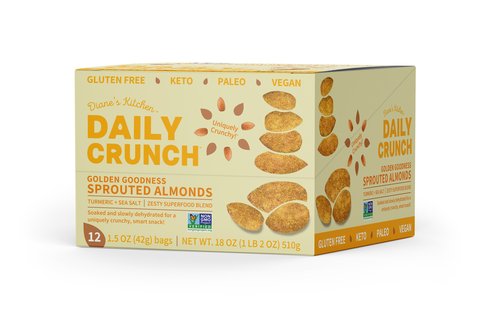 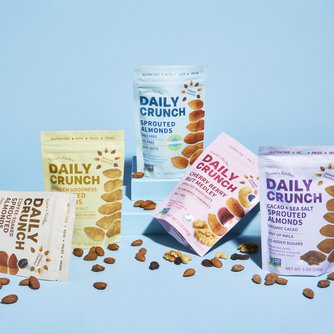 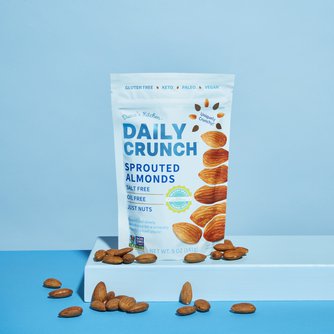 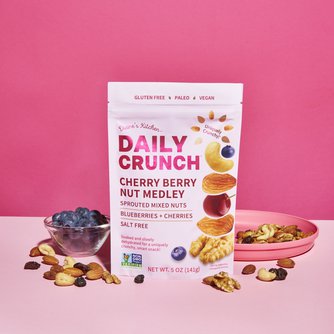 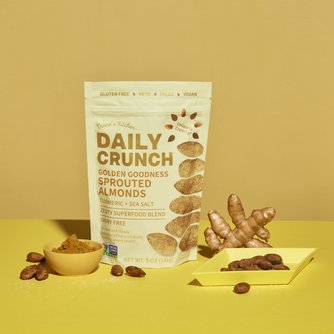 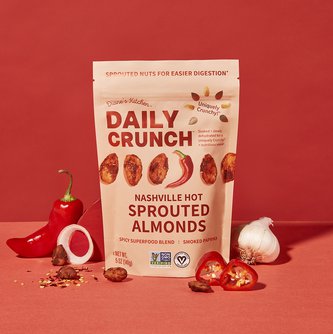 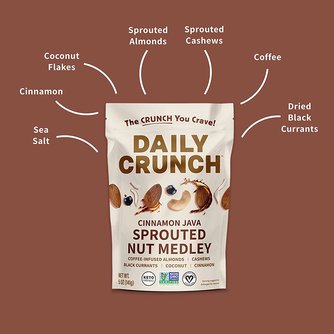 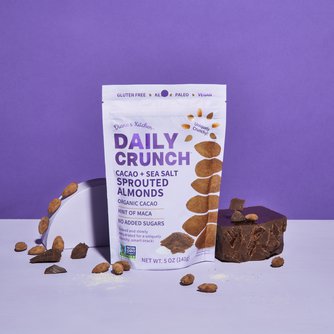 Daily Crunch has a special soak-sprouted-dehydrate process in which the almonds are soaked in purified water, activating germination or 'sprouting'. When the almonds are dehydrated, the ordinary nuts are turned into a uniquely crunchy nut snack with a hollow core and the process not only improves the taste, but also enables better digestion and does not sacrifice vital nutrients.

Daily Crunch Snacks is a women-owned certified company and have recently announced their commitment as one of the first snack brands to exclusively source their almonds from bee-friendly certified farmers, and are passionate about donating towards mental health awareness on college campuses.

It all started when Diane's sister took a trip to India over 15 years ago, where she learned about the health and taste benefits of sprouted almonds.  When you soak almonds for 8+ hours, they "sprout".  The result is easier to digest + more nutrient-dense + crunchier almonds!  Inspired by these health benefits + the "sprouted-nut-crunch", Diane began sprouting almonds and then dehydrating them, as opposed to roasting them.  She would then flavor them with real ingredients and loved the way they tasted, and even more how they made her feel.

Daily Crunch Snacks launched in June 2020 and Laurel, Diane's niece, joined the company with a background in CPG. They've since provided consumers with higher quality, healthier snack options that leave you feeling as good as they taste.

Diane, lost her son George to mental illness while he was away at college and dedicates much of her time and energy to reducing the stigma around mental health.  In support of Diane and her mission, a portion of all Daily Crunch proceeds go to The Support Network, which advocates mental health awareness on college campuses.

Laurel Orley is CEO and co-founder of Daily Crunch Snacks. With more than 15 years of media and advertising experience, Orley largely oversees the marketing, and strategy of Daily Crunch Snacks. After working 13 years at Mindshare on the Unilever business, she found herself loving the consumer-packaged goods world, but wanting to work for a brand she could create from the ground up. While on the Unilever account, Orley worked on flagship billion dollar brands such as the Dove Campaign for Real Beauty and staple brands Dove Men+Care, Hellman’s, Lipton Tea and the Suave portfolio. While working on Dove, Mindshare won the 2011 Media Plan of the Year by Adweek $10 - $25 Million Integrated Category for Dove Men+Care and 2009 Bronze Effie for Dove Go Fresh in Integrated Marketing Services category. In the 2012 listing of the Adweek 50 "people who make the machinery of media, marketing and technology hum", Orley was ranked #20 where Adweek stated ‘She’s like a Velcro wall for Unilever—most everything related to the account sticks to her.” In 2013, she was a Teacher's Assistant for the Executive MBA Program at Columbia University where she taught a channel architecture course. While on maternity leave, she kept finding herself reflecting on how she was so inspired by Diane’s snacks and their differentiating factor in the marketplace. Orley then joined her aunt, and founder of Diane’s Snacks, Diane Orley, to launch Daily Crunch Snacks. Laurel, a New Jersey native, is part of the TedxNashville Society of Fellows and spends her downtime raising her 3 kids with her husband, Ethan in Nashville. She loves eating Nashville Hot Chicken, hiking, and traveling the world.

Dan Stephenson is COO and Co-Founder of Daily Crunch Snacks. Stephenson has experience launching startups along with a strong financial industry background. Upon graduating Vanderbilt University (Cum Laude) with a bachelor’s degree in Economics, Stephenson took a position as Chief of Staff for Reagan-economist, Art Laffer, formalizing much of his macro-economic and investment perspective. He later joined the Ingram Barge Company, gaining experience in the finance industry. However, he took his passion for America’s favorite comfort food, macaroni and cheese, and launched Dan’s Gourmet, gaining insight into the start-up business and food world. Dan’s Gourmet originally started as “Mac Pacs” available in the Nashville Farmer’s Market and grew to 6 frozen SKUs at more than 2,500 stores in 35+ states. Known as “Dan the Mac Man,” Stephenson excelled in pitching his brand, scaling up production with co-packers, leading the packaging design and marketing strategy, and charting the strategic direction for the business. In 2012 at the age of 28, Dan was named one of Nashville's Top 30 Under 30. In February 2013, Dan was honored by Mayor Dean as "Entrepreneur of the Year" by the Nashville Downtown Partnership. Soon after, he was named one of Nashville's "Top Forty Under 40" by the Nashville Business Journal.

Diane Orley is the Founder of Daily Crunch Snacks and the face behind Diane’s Kitchen. After a career in real estate and years devoted to raising three kids, Orley followed her passion, healthy food, and launched Diane’s Kitchen. She learned the process of sprouting from her sister, who was introduced to the method in India. She was fascinated by their process and loved the finished product – their nuts tasted nothing like raw or roasted nuts we eat here in the United States. Diane began to test out different methods of soaking and dehydrating raw nuts while studying the nutritional properties. She perfected her recipe and began gifting and giving nuts to those in her community every chance she could get. In 2008, her nuts literally sprouted into a homegrown business. Their overwhelming response grew into customers all around the country and the impetus to launch Daily Crunch Snacks. She is committed to the mission of educating people that mental health and overall health & wellness go hand-in-hand, and she’s dedicated to breaking the stigma surrounding mental health so we can all live the fullest versions of ourselves. Daily Crunch Snacks is a supporter of The Support Network. A native Texan, Orley now lives in Oakland County, Michigan with her family, and splits her time throughout the year between Texas and Michigan.

You must be signed in as a media user to .
Sign Up today to interact with Daily Crunch Snacks and hundreds of other media-ready brands.