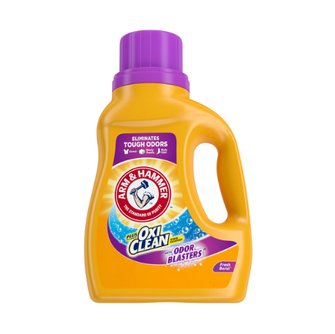 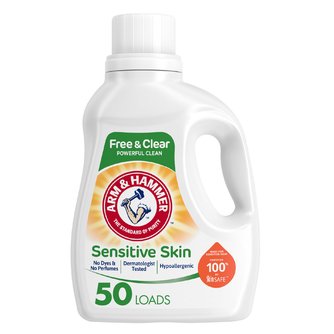 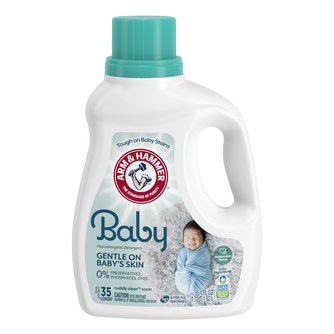 Versatile and affordable. Gentle yet powerful. For generations of families, ARM & HAMMER™ Baking Soda has been the standard of purity, and a trusted household staple in millions of cabinets and pantries.

This trust is built upon their commitment to purity and quality, and is appreciated by consumers today who value alternatives to products with harsh chemicals or those which may harm the environment. That's why ARM & HAMMER™ Baking Soda is a natural, effective, environmentally-friendly and economical choice for taking care of every room in the house.

It's also a natural choice for taking care of every member of your family. Their laundry, cat litter, toothpastes and personal care products are made with ARM & HAMMER™ Baking Soda, delivering the quality you can count on, from the brand you trust.

It was the start of something bigger than either of them knew, but in 1846 brothers-in-law Dr. Austin Church and John Dwight began preparing bicarbonate of soda for commercial distribution. They proudly packaged this simple, yet versatile product by hand into paper bags in their first factory : Mr. Dwight's kitchen.

John Dwight and Company is officially formed. In 1876, he goes on to adopt the Cow Brand as a trademark for Dwight's Saleratus (saleratus is latin for aerated salt, another term for baking soda). Lady Maud, a prize-winning Jersey cow at the Philadelphia Centennial Exposition, is chosen as the icon for the product due to the popularity of using saleratus with sour milk in baking. For many years the Cow Brand and the ARM & HAMMER™ brand are sold simultaneously. Both brands were equally popular, each boasting its own loyal following.

Their first edition of ARM & HAMMER™ "Valuable Recipes" mini-cookbooks arrive in mailboxes all over the country. They become a beloved addition to American kitchens and we go on to publish more than 137 editions, several of which featured family recipes from the wives of our founders, Dr. Austin Church and John Dwight. The tradition lasts almost a century.

Austin Church retires and Church & Co. is formed by his two sons. The ARM & HAMMER™ logo is brought over from son James' business, Vulcan Spice Mills. It symbolizes the myth of Vulcan, the Roman god of fire, who would strike his mighty hammer on his anvil. Over time, this strong and powerful icon becomes recognized as a symbol of quality all across the world.

Their first series of "Beautiful Birds of America" trading cards are created to promote the importance of preserving the environment. The 2x3 inch cards showcase talented artists such as Louis Agassiz Fuertes. Due to their incredible popularity, over the next five decades many other promotional materials are created around the same theme. And, today, they are considered prized collectibles.

Church & Company and John Dwight & Company are officially merged and Church & Dwight Co., Inc. is born! It's a fresh start to a business that goes on to prosper and continues to thrive today, bringing the versatility and convenience of baking soda to homes all over the world.

Church & Dwight Co., Inc. institutes the use of recycled paperboard to package household products at a time when recycling was not the norm. Today, sustainability continues to be an important part of their business values.

"A Friend in Need" health education booklets are created touting the many money-saving personal care uses of ARM & HAMMER™ Baking Soda. Whether for bath, body or teeth, it seems there's s no limit to the powers of this product. The publication even refers to it as a "proven medicinal agent."

In their continuing effort to promote the many uses of baking soda, they place ads in national magazines like Good Housekeeping and McCall's! Many, like the one featured here, even allow consumers to write away for a free book of tips.

Continuing the tradition of environmental education, ARM & HAMMER™ creates and distributes "Birds: Nature's Protectors" posters across the country. These vivid posters feature: color renditions of the "Beautiful Birds of America" trading cards; detailed information on how birds help protect nature and crops; plus, a teacher's guide offering tips on how to use birds and conservation to enhance lesson plans.

ARM & HAMMER™ creates the first quick reference "wheel" which shows consumers how to utilize Baking Soda's versatility around the home. Users simply rotate the outer wheel to the desired solution and exact directions along with measurements of baking soda and water are revealed. Subsequent wheels follow with tips for baby care, personal care and even suggestions for use while camping.

Continuing their longstanding commitment to the environment, they introduced the market's first nationally-distributed, phosphate-free detergent: ARM & HAMMER™ Powder Laundry Detergent. Recent findings had shown the harmful effects phosphates could have on the health of their lakes, streams and other freshwater bodies. The rushed to provide a solution and, in less than a year, they were able to bring the product from concept to market. That same year in April, they were honored to be the sole corporate sponsor of the first annual Earth Day.

1972 - A New Idea - Baking Soda in the Refrigerator and Freezer!

Marking a new era for both ARM & HAMMER™ and the laundry care business, they launched the first detergent with baking soda! Both the powder and liquid laundry detergents become best sellers. The success of this one product sparks us to create innovations in numerous other categories including toothpaste, carpet deodorizer and cat litter.

In preparation of the Statue of Liberty's 100th anniversary on July 4, 1986, 100 tons of ARM & HAMMER™ Baking Soda are used to gently clean and beautify. They remove 99 years of coal tar without damaging the delicate copper interior.

As the issue of environmental awareness continues to heat up, they help spread the word as a proud sponsor of the one-hour music special This Island Earth on the Disney Channel. Produced by the National Audubon Society, it features music by Grammy award winning singers Gloria Estefan and Kenny Loggins - he later goes on to win a Daytime Emmy for the title theme song.

ARM & HAMMER™ hits the World Wide Web with full force! Their exciting new interactive website went live, offering consumers all-around-the-house uses for our products at the click of a mouse. It's the perfect resource for finding quick solutions to real household needs.

ARM & HAMMER™ teams up with the Queen of Clean Linda Cobb, and the National Trust for Historic Preservation to gently and safely clean some of America's historic homes. This exciting partnership also allows them to create awareness on the importance of historic preservation.

Their LEED-Silver facility in York, PA manufactures its first bottle of ARM & HAMMER™ laundry detergent. By 2011, the LEED-Silver plant serves as the top producing location for ARM & HAMMER™ laundry products and is recognized as the most sustainable building they own. As they look toward the future, they continue to strive for a brighter tomorrow, actively developing new ways to improve, support and promote environmental awareness and values.

Arm & Hammer
MORE POWER TO YOU.

You must be signed in as a media user to .
Sign Up today to interact with Arm & Hammer and hundreds of other media-ready brands.