Boasting spectacular city views, stunning art, and tranquil gardens, Yamashiro has welcomed guests to its magical setting above Hollywood Boulevard for generations. From its origins as a private estate to its modern incarnation as an Asian fusion restaurant and event venue, the fascinating history of Yamashiro is something out of a Hollywood script.

The name Yamashiro translates as “Mountain Palace” in Japanese. In 1911, the Bernheimer Brothers began construction of the hilltop mansion to house their priceless collection of Asian treasures. Hundreds of craftsmen were brought from the Orient to recreate the replica of a palace located in the “Yamashiro” province mountains near Kyoto, Japan. Yamashiro sits 250 feet above Hollywood Boulevard and was completed in 1914. 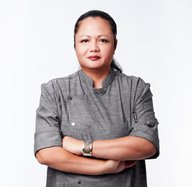 The 100-year old Yamashiro Hollywood restaurant now boasts the first female and first Filipina Executive Chef in the concept's century history! Executive Chef Valerie Archer was promoted to lead Yamashiro’s culinary program just before the pandemic hit in a historic move that brought rare female representation to the highest position at one of Los Angeles’ most iconic restaurants for the first time ever.

Growing up, Vallerie developed a passion for cooking through her experiences in the kitchen with her immigrant grandparents. With them, she became obsessed with watching cooking shows, reading cookbooks, and trying every cuisine she could. However, she didn’t see the culinary arts as a career path, so she worked many different jobs including being a medical biller, a makeup artist, and eventually a stay-at-home mom, before a love of baking with her daughter eventually pushed her to enroll in culinary school in her 40s! In the decade since, Chef Vallerie has risen through the ranks, ultimately joining Yamashiro first in 2019 as the Executive Pastry Chef, then working her way up to Executive Sous Chef, and Executive Chef shortly thereafter.

At Yamashiro her influence shows through in the menu of the highest quality, sustainable seafood presented in innovative, playfully approachable, and awe-inspiring dishes such as the stunning Sushi Boat, which feature a chef’s selection of sashimi, nigiri, and sushi rolls in a miniature wooden boat. The Sushi Pizza features yellowtail, salmon and tuna sashimi on a flour tortilla with truffle cream sauce and smoked salt. In addition to innovation, presentation is everything, and guests can experience Ishi-Yaki cooking stone presentations where American Wagyu is grilled tableside on a hot lava rock.

You must be signed in as a media user to .
Sign Up today to interact with Yamashiro Hollywood and hundreds of other media-ready brands.