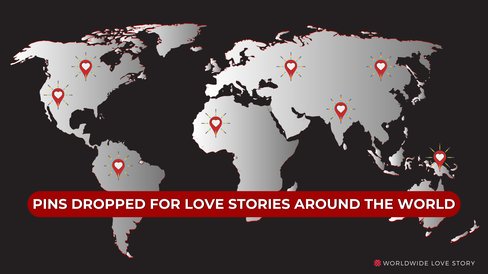 The Worldwide Love Story is a love-centric platform of user-generated, location-based love stories on a mission to raise the vibration of love on the planet, one love story at a time.

Where were you when you fell in love? Where will you be?

Standing on the sidelines trying to keep her broken heart together, she watched magnificent, thoughtful and often simple displays of love wondering, How have all these people been able to figure out love and I haven’t?

Outfitted with a camera and tasked with collecting well-wishes for the happy couples on their big day, Alicia slowly began to ask the coupled attendees if they had any advice for the newlyweds instead.

Exhausted, heartbroken and burned out, a friend invited her on a staycation. It was then, asleep in a castle on the Las Vegas Strip, that she was startled awake with the epiphany that would become the heartbeat of the Worldwide Love Story: It’s about the story.

Curious, Alicia began reaching out to couples asking if they would be willing to be interviewed about their love story.

And what happened next was incredible. Every couple she approached, save one, said yes.

The stories were magical, heartbreaking, surprising, and incredibly moving.

It was then that she realized it was time to make both the love stories, and the ability to share them, accessible on a larger level.

Since that time, the Worldwide Love Story has evolved into a love-centric platform of user-generated, location-based, collaborative love stories, offering community, connection & hope. A place for those who love love, the love-curious, and the people who love them… to interact with love in a new way.

Imagine if Humans of New York and Google Maps had a love child - it would be the Worldwide Love Story.

A place to drop a pin on the map for where you were when you realized you loved your person.

A place to honor milestones.

A place to find love landmarks.

A place to keep love top of mind.

And a place to raise the vibration of love on the planet.

Worldwide Love Story
Raising the vibration of love on the planet, one love story at a time

You must be signed in as a media user to .
Sign Up today to interact with Worldwide Love Story and hundreds of other media-ready brands.