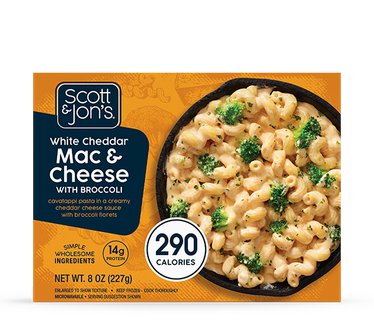 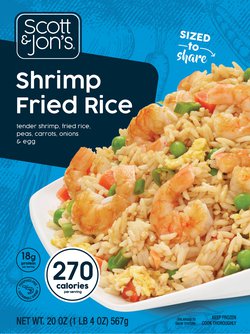 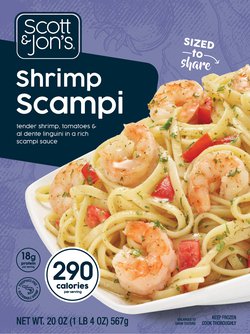 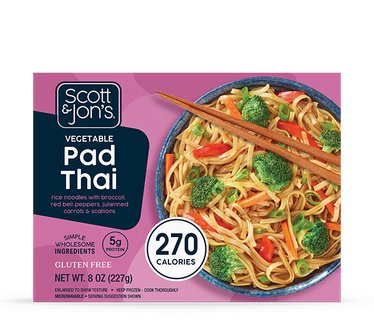 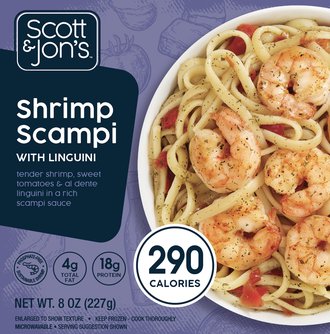 Launched in 2017, Scott & Jon's is redefining low-calorie, frozen meals. We believe in a higher standard for lower calories—creating wholesome, quality dishes that warm your soul and make you feel good in every way. Their foods are big on flavor— they use indulgent recipes and bold ingredients to make lower-calorie eating more delicious than it’s ever been before.

1. Scott & Jon's starts with indulgent recipes. Our brand was born from the frustration of tasteless, low calorie meals that left consumers unsatisfied. We want to raise the bar on  healthy meals. Each of our meals delivers delicious, indulgence that satisfies cravings and warms the soul.

2. Meals under 300 calories - So what is our magic? We use spices, herbs & seasonings to deliver the most flavor per calorie. Smart substitutes, like Neufchâtel cheese, replace heavy cheeses. And we even use real butter, just less than other brands.

3. Simple Wholesome Ingredients - Each recipe begins with a shopping trip to the local grocery store. We prioritize ingredients that can often be found in their mother’s kitchen pantry.

Scott & Jon’s indulgent, guilt-free meals can be found in the frozen meals department of over 13,000 grocery, mass merchandise and natural foods stores across the U.S.

Scott & Jon Demers are always looking to raise the bar. The brothers self-funded and launched the Cheating Gourmet brand in 2012 to bring innovation  to the seafood category. Their first product was Crabbies, a frozen food take on their grandmother’s recipe for cheesy crabmeat on English muffins. By 2014, the brother realized a larger opportunity in creating premium appetizers. The portfolio included a range of frozen seafood products, like Lobster Crostini, Crab Stuffed Mushrooms and Bacon Wrapped Scallops. The brand name, Cheating Gourmet, was so named because consumers are essentially “cheating” by merely heating up gourmet appetizers. Their idea caught on so quickly that the company's revenue grew 198.19% over two years to $1.96 million in 2015, up from $1.03 million in 2014 and $655,862 in 2013. That made it Mainebiz's fastest growing small company.

A step change occurred in 2017, when Scott and Jon launched shrimp & rice bowls into seafood departments. These products captured the brother’s passion to redefine low-calorie eating. Each meal combined delicious flavors from premium ingredients for less than 300 calories and in a much more convenient-to-prepare format than traditional seafood. The original flavors included Garlic Butter Shrimp, Cilantro Lime Shrimp, Sesame Ginger Shrimp and Chipotle Shrimp. The meals were packed into bowls which could be heated in a microwave for lunch or a dinner. The idea caught on and the brothers noticed their more-indulgent recipes were selling faster than other flavors. In 2018, pasta bowls were launched,  including Shrimp Scampi, Alfredo Shrimp, Shrimp Ramen and Spicy Shrimp Ramen. Distriubtion expanded to include national retailers such as Sprouts, Giant Eagle and Winco.

One of the strengths of the company, notes Scott, is that he and his brother “know what we don't know.” Early on they surrounded themselves with experts. The board of directors includes

Carl E. Lee, the former president and CEO of Snyder’s-Lance Inc., maker of snack foods Snyder’s of Hanover, Cape Cod Potato Chips, Late July and Pop Secret. Lee became interested in investing in the company “because of the strong leadership of the Demers brothers, as well as the value of their products for consumers and retailers alike.Art Drogue, a retired executive with experience from Unilever, Best Foods and NabiscoAmanda Klane, co-founder of Yasso frozen Greek yogurtStuart Klane, retired founder and president of SM Klane Food Brokerage, which represented hundreds of food lines including Chobani Greek YogurtJohn Maggiore, category manager of natural foods at Stop & Shop

Another key player is Robert Craig of Centerman Capital in Needham, Mass., an advisor who has invested $250,000 in the company through his firm, $50,000 personally and committed another $100,000. “These guys, Scott and Jon, come in and think about how to turn a low innovation marketplace into a high innovation one — and a healthy one,” Craig says. “They do what they say and say what they do.”

In 2019, Cheating Gourmet was rebranded to the names of its co-founders, Scott & Jon. The brothers also built out the organization by hiring executives with deep experience in packaged goods. New packaging was introduced and distribution expanded into Target, HEB, Safeway, Harris Teeter and The Fresh Market.

Today, Scott & Jon’s is one of the fastest growing, better-for-you brands in the retail freezer. We’ve made comfort food lighter – prioritizing smarter ingredients for dishes that are always under 300 calories. 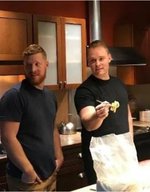 Scott & Jon Demers are two brothers and former athletes from Auburn, ME  who figured out how to have their cake and eat it too—big flavor food that won’t make your pants too tight. Their parents were entrepreneurs of sorts, owning both a catering and restaurant businesses. Scott and Jon are athletes that learned how to eat clean and appreciate staying active. And as parents, they know the power of no-compromise food that’s ready when you are. That’s why they created a line of high-quality, actually delicious meals that are awesomely under 300 calories. Each meal has high standards (even if its calorie count is low). They craft each entree using indulgent recipes, rich ingredients, and savvy substitutions that won't ever disappoint your taste buds. Scott was working as a mortgage broker and Jon as a fire fighter before starting the business. Both brothers are married and raising two children apiece. 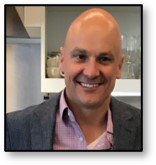 Mark is a results-focused leader known for consumer-first thinking, big picture visions, and building winning cultures. As a business leader, he strikes the right balance between pushing for better alternatives and “rolling up my sleeves to get it done.” As an innovator, he likens himself to a hunter - curious, insatiable and willing to destroy. Mark believes in the tandem of healthy eating and happy taste buds leading to better living. Prior to joining Scott & Jon’s, Mark held progressive roles at Mattel, Tyson Foods, Sunny Delight Beverages Co and mostly recently at Perfetti Van Melle where he led innovation for the Airheads brand. Originally from Chicago, IL, Mark has a BS in Journalism from the University of Kansas and an MBA in Marketing from the Owen Graduate School of Management at Vanderbilt University.

You must be signed in as a media user to .
Sign Up today to interact with Scott & Jon's and hundreds of other media-ready brands.