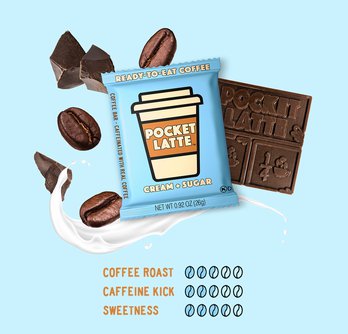 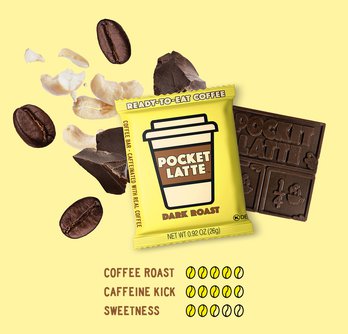 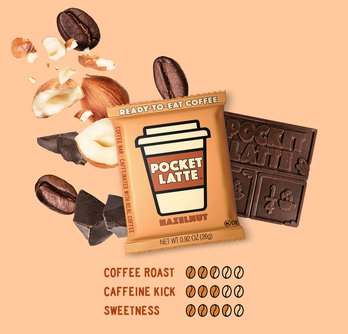 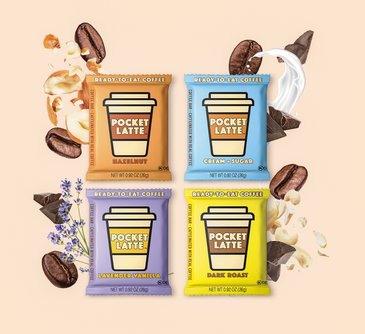 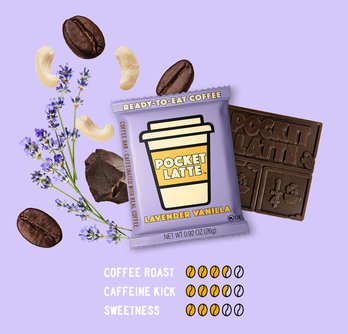 Pocket Latte is The Original Coffee Bar®—the first-ever coffee chocolate that's naturally caffeinated from 100% arabica coffee. With a growing trend in energy products, we noticed that most products either don't work, or they leave you feeling wired like a robot. The problem that we found is that consumers don't know the difference between synthetic and naturally-occurring caffeine, and companies are taking full advantage. Lab-made caffeine is cheaper, and it metabolizes at a much faster rate, causing the jitters and quickly leading to a caffeine crash (similar to a short burst of adrenaline). So, we set out to find the solution and successfully launched on Kickstarter as a natural energy-alternative that kicks like a cup of coffee, and is suspended in high-grade cocoa butter for a sustained and smooth energy buzz. Our products are Non-GMO Project Verified, kosher certified, vegan, all-natural, gluten-free, soy-free, palm oil-free, and proudly made in the USA. It's Pocket Latte's mission to #WakeUp the world with natural energy, disrupting the snack industry's overuse of synthetic caffeine.

Pocket Latte successfully launched on Kickstarter in June 2018 for crowdfunding and proof of concept. In early 2019, we received a private investment at a valuation of $1.6 million, which we primarily used to begin building our own manufacturing site to gain a competitive edge over co-packers. Later that year, August 2019, we secured an angel investment that enabled us to launch nationwide in over 6,500 stores, with partners like UNFI, Harris Teeter, Bevmo, Cost Plus World Market, and 7-Eleven. Pocket Latte was featured by New Hope Network as "4 Attention-Worthy Trends" and "10 Exciting Coffee-Based Product Launches". We plan on adding a few exciting product lines in 2021!

My mother—she’s the reason for Pocket Latte to exist. We embarked on this journey together and we’ve been partners in crime ever since. Throughout my life, she was always incredibly loving and happy, and that never faltered despite the reality of our situation. She was a single mother, who spoke little English and often worked two jobs to put food on the table. I’ve always felt that it was my duty to provide her with a stable career where she could express her artistic passion. Pocket Latte is a mother & son company that I created as a coffee lover, for my mother who’s an artist by passion.

But really, it’s the product of motherly love. 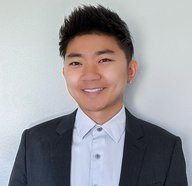 Chris Young is the CEO & co-founder of Pocket Latte. He focuses on taking the brand to new heights, while he oversees the sales and marketing teams. The roots of Pocket Latte originate from Chris's personal upbringing. He was raised by his single, immigrant mother in the confines of Atlanta. They never had much, but he always admired how she was able to juggle the impossibilities of life and still be full of love and happiness. Ever since a young age, Chris knew that he had to create a stable career for her where she could express her artistic freedom. At age 20, Chris decided to quit his job as a waiter and use his trunk stash of tip savings to begin his entrepreneurial journey. Four start-ups later, while finishing up his Economics degree from the University of Southern California, Pocket Latte was born in the kitchen of his student apartment. He calls it the "product of motherly love." This led to the core element of Pocket Latte's mission: to help struggling single parents across the nation. 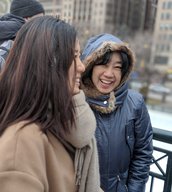 Young Kwon is the head of production who oversees the manufacturing and product development. She's also our secret weapon to keeping everyone happy, since she's always full of smiles and optimism. She's where Pocket Latte gets its artistic influence. Young immigrated to America as a painter and artist. She eventually took on various career paths, including graphic design. Her goal is to grow our mission to support struggling single parents in America.

You must be signed in as a media user to .
Sign Up today to interact with Pocket Latte and hundreds of other media-ready brands.