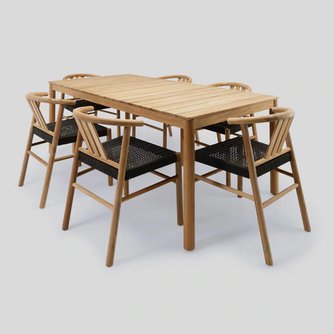 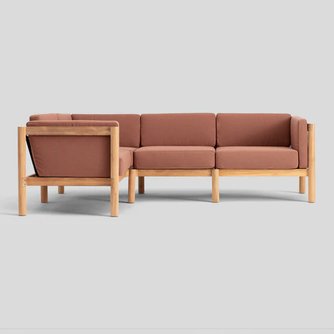 Neighbor makes modern outdoor furniture and accessories for your living room outdoors. Their furniture is designed with indoor sophistication but built to withstand the forces of nature with high quality, sustainably-sourced materials like FSC-certified teak and recycled plastic lumber. Customers love the comfort and modularity of Neighbor’s patent-pending Haven collection—you can customize your sectional configuration to fit your space. All orders ship free in the contiguous US and can be returned (free!) for up to 45 days. Neighbor is based in Arizona, has a downtown Phoenix showroom. Available at hineighbor.com and online at Crate and Barrel.

Founded in 2020 by Nick Arambula, Mike Fretto, and Chris Lee, Neighbor aims to create a seamless transition to underutilized square footage outdoors with furniture that's designed with indoor sophistication and crafted to withstand the forces of nature. Their signature collection is made of sustainably harvested solid teak wood, weather-resistant and fast-drying foam cushions, and life-proof Sunbrella® upholstery that will not fade. Neighbor's furniture is designed to fit any space; its modular system enables any configuration.

Chris started his career managing a team in the Midwest on a factory floor. That introduction to manufacturing gave Chris a strong foundation in supply chain and process optimization. More recently, Chris led critical operations at Tuft & Needle as the Head of Supply Chain. He was responsible for enabling the business to go from manufacturing and fulfilling a few hundred mattresses a week, to nearly 10,000 a week at its peak. In addition to supply chain contributions, Chris facilitated the introduction of new products and played a key role is conceptualizing T&N’s award winning Mint Mattress. When not working - which is a rare occurrence - there is a good chance you’ll find Chris crafting his latest DIY endeavor.

Mike is our craftsman. Mike is nearing 20 years of experience in design and brand development. Early in his career Mike was a consultant supporting clients like Facebook and Coca-Cola, all while finding time to build his own non-profit that benefited poverty stricken citizens by telling their stories through design. Before Grand Collective, Mike was the Head of Product Experience at Tuft & Needle. In his time at T&N, Mike played in pivotal role in building the brand and products. In short, if you opened a product from T&N in the last four years, Mike had something to do with every element of that process. In his free time, Mike explores

Nick is a reformed CPA, who left the world of public accounting more than six years ago. However, his exposure to corporate tax and management consulting have made Nick pretty good with numbers and strategy. Prior to Grand Collective, Nick was the Interim CEO and COO at Tuft & Needle. He played a key role in growing revenue from $40M to $200M through expansion of physical retail stores and product distribution, by establishing deals with Lowe’s, and Crate&Barrel. As Interim CEO, Nick led the company to its most profitable
months since inception. In his spare time, Nick can be found riding his bike or dancing to any song from Trolls with his daughters, Chloe and Eva.

You must be signed in as a media user to from Neighbor and interact with hundreds of other media-ready brands.