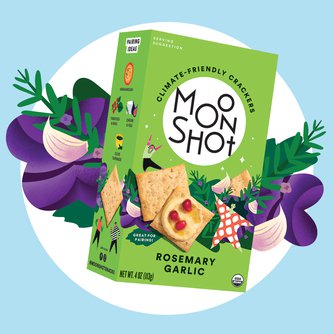 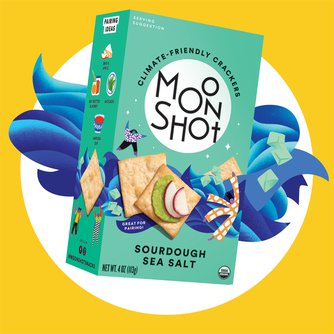 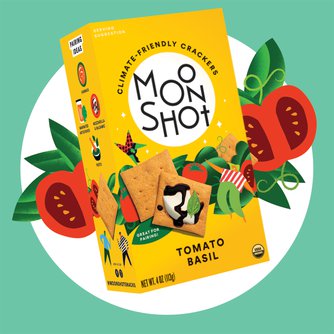 Moonshot is the first climate-friendly snack brand that's better for you and the planet. Made with regeneratively grown ingredients that help sequester more carbon in the soil; Moonshot is on a mission to tackle climate change, by changing the way the world snacks.

Moonshot's plant-based crackers are made with the highest quality ingredients- heirloom wheat and heart-healthy sunflower oil, and no added sugar or preservatives.

Certified USDA Organic and Non-GMO, Moonshot's ingredients are grown by farmers that use regenerative farming methods to improve soil health and bury carbon in the ground, resulting in a 100% Carbon Neutral Snack.

Launched in 2020, Moonshot was born from a vision for a better world. According to the UN, approximately 34% of global greenhouse gas emissions come from food systems and land use - that's more than a third. More alarming, scientists believe that, if we do nothing to change how we produce our food, we will have less than 60 years of topsoil, the life force of our food, left. Seeing the sizeable role food plays in climate change, as well as the industry’s powerful potential to be a part of the solution, Julia Collins’, a serial founder and experienced restauranteur, set out to build the world’s first climate-friendly snack brand. Inspired to create a better world for her young sons, Julia is on a mission to create an entirely new category of climate-friendly food and catalyze consumers to join the Climatarian movement. 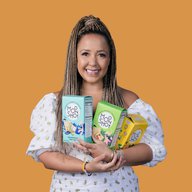 Julia Collins is a serial entrepreneur who realized food was her calling as a young girl in San Francisco where it was the epicenter of her community. She’s spent her career building food companies, helping to launch and grow brands such as Mexicue, Murray’s Cheese Bar and Harlem Jazz Enterprises, the company responsible for the award-winning restaurant, The Cecil. She later went on to co-found Zume Pizza where she became the first Black woman to co-found a unicorn company. When she became a mother, she knew she needed to find a way to bring delicious food to people in a way that helped heal the planet for everyone including her son.

Today, Julia leads Planet FWD, a company on a mission to tackle climate change by making it easier to bring climate-friendly products to market. The company is building a software platform for regenerative agriculture alongside the US’ first climate-friendly snack brand, Moonshot.

In addition, Julia sits on the advisory council for Launch with GS and the Food for Climate League board, serves on the All Raise operating committee, and is an EIR for Cleo Capital. She is an active angel investor focused on funding female entrepreneurs and BIPOC founders.

You must be signed in as a media user to .
Sign Up today to interact with Moonshot and hundreds of other media-ready brands.