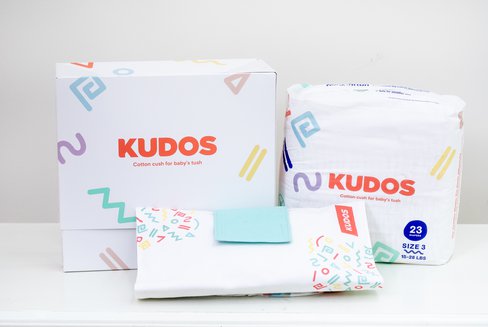 Kudos offers the most natural, leak-defying, sensitive-skin-loving diapers on the market. They are the first and only disposable baby diaper to earn the cotton natural(TM) seal from Cotton Inc. for using 100% breathable cotton instead of plastic. Kudos chooses cotton because it’s naturally soft, sustainable and the number one recommended material for those suffering from rash or eczema. Combined with Kudos’ patent-pending DoubleDry(TM) tech which uses two plant-based absorption layers instead of the traditional one to funnel and distribute moisture away from baby’s bum, Kudos are a game changer when it comes to protecting baby’s sensitive skin, the planet, and your couch. Kudos diapers are OEKO-TEX Standard 100 certified to be free of harmful ingredients, and are made with 4x more plant-based materials than the leading disposable diaper.

When founder Amrita Saigal was a Junior at MIT, she landed an internship working as a manufacturing engineer for Always Pads at P&G. She had a conversation with her Grandma that she hadn’t had until then - what did she do during her periods growing up in India during the 1940s? Turns out she used old rags, had to sleep outside the house while on her period, and was not allowed to go to school. Amrita remembers feeling shocked, believing that this was something purely historical - but no, many women in India are still experiencing this today.

The method of using rags was certainly sustainable, but it clearly was not elegantly sustainable. It didn’t enable women to go about their lives as they would on any day they weren't having their period. So, for her senior project as an undergrad, Amrita developed a sanitary pad made of sustainable banana tree fiber, one which had all the function of a sanitary pad you could pick up at CVS, but that was sustainable. This was successfully commercialized after she graduated into Saathi Pads, now one of India's largest eco-friendly sanitary pad companies improving the lives of thousands of women in India.

As Amrita entered her thirties, many of her friends started having kids and they wanted a diaper that followed the same principles of elegant sustainability that had motivated Saathi: a diaper that was as convenient and reliable to use as the industry standard disposable diaper, but that was as sustainable as a cloth diaper. She knew that through innovative engineering we could do better. Out of this realization, Kudos was born.

Amrita Saigal is the founder & CEO of Kudos. Prior to Kudos, Amrita co-founded one of India’s leading manufacturers of eco-friendly sanitary pads made from waste banana tree fiber. Her work experience spans manufacturing for Procter & Gamble’s Always pads and Gillette razors, operations & manufacturing for Google Glass, and all-around-all-hats-wearer as one of the earliest employees at Thunkable, where she was the Head of Business Development. Amrita graduated with an S.B. in Mechanical Engineering from MIT and an MBA from Harvard Business School.

Moira Finicane is the Head of Marketing for Kudos, and mom to Kudos’ newest diaper tester, daughter Avery, born July 2020. A seasoned marketer with close to 15 years of experience across a variety of industries, Moira started her career at MIT’s Legatum Center for Development and Entrepreneurship as part of the team that invested in Amrita's first company, Saathi. Most recently, Moira was part of the global marketing leadership team at Uber Eats where she spent three years leading global restaurant and courier product marketing during a time of tremendous growth for the business. Moira holds a BA in Economics from Harvard University and an MBA from the MIT Sloan School of Management.

Diaper industry veteran, patent-holder, grandfather, and avid boater & fisherman living in Michigan’s UP, Jim is a highly trusted Kudos advisor. Jim brings 36 years of experience working with Procter & Gamble -- including 22 years learning a thing or two about diapers as part of the engineering leadership team for Pampers. When you include his 3 years of experience as the Vice President of Engineering for Kraft Foods, that’s 39 years of building consumer products.

You must be signed in as a media user to .
Sign Up today to interact with Kudos and hundreds of other media-ready brands.