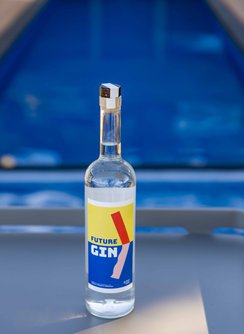 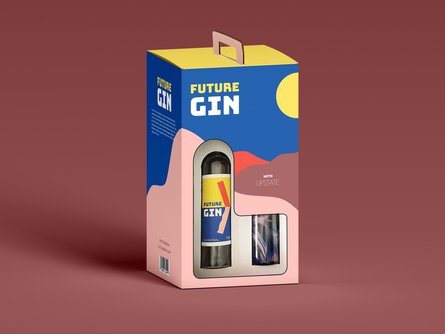 Future Gin combines the structure of a dry gin with the vibrant flavors of Southern California. Distinct yet versatile, they used Meyer lemon from Natasha & Freya’s garden to incorporate juicier citrus qualities. They added avocado leaf, which they plucked from the tree in Amy’s backyard to give the gin a richness, and also included grape leaf as an ode to Amy's background in wine. These are distilled alongside traditional botanicals to produce a gin that’s as classic as a martini and as bright as their future. And perhaps the most distinctive quality: the entire vertical, from distillation, to botanical development, to marketing and branding, to distribution, is owned by women.

In 2018, Amy Atwood, Mary Bartlett, Natasha Case, and Freya Estreller founded Future Gin. A product of friendship, the gin was born from Atwood’s desire to create a gin and her friendships with her three co-founders, who all bring something unique to the table. With Atwood’s skills as a distributor, Case’s and Estreller’s branding knowledge and success in launching businesses, and Bartlett’s longstanding experience in the hospitality industry with a focus on bars and spirits, the four women combined their skillsets to create the first 100% female-created, -distributed, and -owned gin. 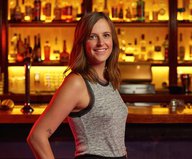 Across 15 years in hospitality, Mary Bartlett has supported or directed 18 bar openings and developed three new spirits on their way to market. Bartlett found her way to hospitality in Portland OR, starting as a barista and server before rising to bartender at Teardrop Cocktail Lounge and bar manager at Rum Club and Park Kitchen. She then moved to Los Angeles and became the bar director of Honeycut where she earned a Zagat 30-under-30 Award and supported the consulting branch of Proprietors LLC.

From there she moved to the Ace Hotel DTLA and directed the beverage programs in four F&B outlets including a 1600-seat theatre. This led her to taking over the corporate beverage director role at Arclight Cinemas, managing staff and programming for 15 locations around the US.

In 2018, Bartlett co-founded Future Gin, a 100% female founded, created, and distributed gin made in Los Angeles. She has been featured in the New York Times, LA Times, Imbibe, Playboy and Cocktail Codex. continues to act as managing partner for Future Gin while consulting with Open/Up. In addition to her expertise in spirits and craft cocktails, Mary focuses on natural wine and incorporating sustainability into hospitality.

Amy Atwood has been working in the hospitality industry since 1996, when she was running beverage programs in Australia. After many years spent working for other wholesalers and importers, she founded Amy Atwood Selections in 2009. She started her company because she wanted to work with wines she loves and winemakers she respects. After 15 years of working for other wine wholesalers and importers, her focus had shifted towards smaller production wineries, making wines more naturally. This means organic or sustainable farming, and little to zero intervention in the winery. And most importantly, the wines must bring joy and be delicious to drink.

In 2018, she co-founded Future Gin with Mary Bartlett, Natasha Case, and Freya Estreller. A product of friendship, Future Gin was born from Atwood’s desire to create a gin and her friendships with her three co-founders, who all bring something unique to the table. With Atwood’s skills as a distributor, Case’s and Estreller’s branding knowledge and success in launching businesses, and Bartlett’s longstanding experience in the hospitality industry with a focus on bars and spirits, the four women combined their skillsets to create the first 100% female-created, -distributed, and -owned gin.

Natasha Case is a co-founder of Future Gin, the first 100% female-created, -distributed, and -owned gin. Case, along with her wife, Freya Estreller, and two friends, Amy Atwood and Mary Bartlett, founded Future Gin in 2018 when they decided they wanted to create something female-owned in an industry that rarely has women in charge. Future Gin combines the structure of a dry gin with the vibrant flavors of Southern California and is available in over 30 states online.

Additionally, Case also founded Coolhaus in 2009 with Estreller because they knew they could create better quality and more unique ice cream and because they did not feel represented by the ice cream brands on shelves. They left their jobs in architecture at Walt Disney Imagineering and non-profit real estate, respectively, to create the brand, from product to culture, that they wanted to buy. They launched their architecturally-inspired ice cream sandwich company from a barely drive-able postal van at the Coachella Music Festival to an audience of 100,000 where the brand went viral. Since then, Coolhaus has scaled to a national fleet of trucks in LA and NYC, a flagship store and innovation center in Culver City, and a grocery business of ice cream sammies, pints, cups, mini sammies and soon-to-be cones in dairy and dairy free sold everywhere from Whole Foods to Thrive to Publix and in venues like The Rose Bowl, Madison Square Garden, The Hollywood Bowl, The Greek Theater and The Forum.

Case has been named a Forbes 30 under 30 Food & Beverage, Zagat 30 Under 30, Linked in 10 under 35 for Food & Leisure, 10 Most Successful Women in Business by Leaders Globe, and UCLA LGBTQ+ 2019 Alum of the Year. She has been featured in many national publications and media outlets like Entrepreneur, LA Times and Bon Appetit and judged Food Network’s Chopped, King of Cones, and Top Chef Jr. She co-hosted her own podcast, ‘Start to Sale’ through Eater/Vox Media. In 2019 she joined YPO in the Beverly Hills chapter. Case has successfully launched brand partnerships with French’s Mustard, Hulu, Goldieblox (STEM for girls), and Ritz Crackers

Freya Estreller likes bringing cool, niche products to the masses. She co-founded Future Gin, a collaboration with her wife, Natasha Case, and their two female friends, Amy Atwood and Mary Bartlett, to create a Los Angeles distilled and inspired gin with an activist mission. Future Gin can now be found at craft spirits shops and cocktail focused bars and restaurants in CA and NY and shipped to your door all across the US.

She also co-founded Coolhaus Ice Cream with Case in 2009 as food truck and artisanal food pioneers. Coolhaus is now the largest women-led and LGBTQIA founded ice cream company and their ice cream pints, mini-cups, sandwiches and cones are sold in over 5,000+ doors all across the US and internationally. Additionally, Estreller is currently the COO of Tea Drops, a minority and women founded Organic and Fair Trade omnichannel tea company based in Los Angeles that just raised a $5m Series A.

Estreller was born and raised in Los Angeles (Atwater Village represent!) and has a BA in Sociology with a minor in Business from Cornell University. She is a wife and mom to two wonderfully rambunctious kids and an old man mini schnauzer. She is active in youth and entrepreneur mentorship and investing in real estate and start-up consumer brands.

You must be signed in as a media user to .
Sign Up today to interact with Future Gin and hundreds of other media-ready brands.