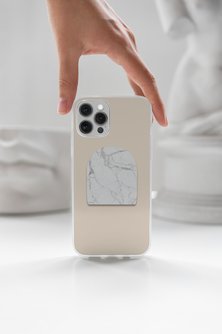 An adhesive mobile phone flap that allows phones to stick to almost anywhere. Flipstik is proud to be an LGBTQ+ and Black-owned brand founded by Akeem Shannon.

Akeem turned an idea from his NASA engineer uncle into the ultimate sticky accessory. He is launching Flipstik in Target stores nationwide March following his successful debut on Shark Tank. Retail, $10. Affiliates available via Skimlinks and ShareASale.

Flipstik is a thin device that attaches to the back of a phone and, when flipped down, will stick onto practically any flat surface, from metal to glass to vinyl to tile. The reusable adhesive was developed by NASA in the 1970s and is based on the fibrous structure of gecko feet. The flap also acts like a kickstand to prop up the phone on a table top. Say goodbye to numb hands, aching arms, and dangerous driving and hello to hands-free content creation, conference calls, Netflix binging and GPS use. Check it out here.

Flipstik can hold up to 2 pounds, be used thousands of times and cleaned with soap and water or alcohol wipes. It comes in 15+ colors and patterns that follow seasonal and cultural trends, with a year-long warranty. This enables hands-free selfies, zoom conferences, hands-free Youtube or Netflix viewing on planes and trains, and hands-free GPS use while in any vehicle.

Akeem learned about the synthetic “setae” material in a phone call with his uncle, who was using it in a project at NASA. Akeem, who had become a top sales rep for mobile phone and tech companies, was determined to become an entrepreneur and open doors for fellow minority and LGBTQ+ founders. The space-age sticky stuff was just the ticket.

Akeem’s 2020 pitch on Shark Tank – which began with a rap that billionaire shark Mark Cuban called the “best rap on Shark Tank ever” – netted him a $100,000 offer from shark Lori Greiner.

Flipstik is designed in Akeem’s beloved St. Louis and he is determined to build the company into an employment engine for the region. He was a member of a local Boys & Girls Club and the Boy Scouts growing up and gives back as a volunteer with Big Brothers Big Sisters and in speaking to students across the city.

You must be signed in as a media user to .
Sign Up today to interact with Flipstik and hundreds of other media-ready brands.