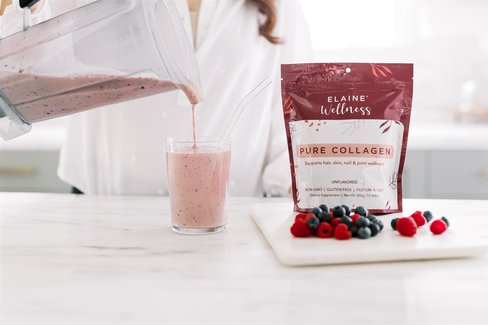 Midlife is a powerful transition, not an ending!

In this in-depth, 8-week course you learn:

+ How to eat for fat loss, energy, stamina, vitality, and to feel your best.

+ The exercise you need to look and feel great

+ How food and exercise impact sleep, hot flashes, and mood in midlife.

Radiant beauty is an inside job and aging is a privilege. The diet and beauty industries have shamed women for long enough and we believe there’s a better way to talk about aging. Elaine created Elaine Wellness, a company that offers high-quality products to help women look and feel their best from the inside out. There’s so much opportunity to create community and conversation around beauty, health, wellness, and aging that has a positive, inclusive message. Very few companies are speaking to women 40+ and we're here to fill that void. They've built a community of women to have conversations about what it means to age well.

Elaine never set out to build a wellness brand, but had an idea that she just couldn’t get out of my mind. As a certified Pilates instructor, the journey that would completely transform her relationship with wellness and beauty began in 2013 when seemingly out of now where her health took a complete nosedive and she built it back up from within. Elaine was burning the candle at both ends working six days a week teaching and managing two Pilates studios for a private club in Los Angeles.

Elaine's symptoms began with a new pair of pants that wouldn’t zip up, even though nothing about her diet or fitness had changed. Next came the fatigue that wouldn’t go away even after ten hours of sleep. Her skin lost its glow, becoming dry and lackluster and she developed Guttate psoriasis from her scalp to my ankles. Then, a chilling question from my hairstylist: “What’s going on with your hair? It’s breaking and falling out.” I was diagnosed with a thyroid autoimmune disorder called Hashimoto’s.

Elaine started reading everything she could get her hands on about reversing autoimmunity through diet, and even though this was not the route endorsed by my doctors, she had nothing to lose. Elaine began an autoimmune Paleo diet — first eliminating gluten, dairy, and grains, then slowly adding fish to my repertoire after 24 years as a vegetarian and vegan.

Collagen came up again and again as an important supplement for hair, skin, and nails so she added that in too. Within a matter of months, Elaine's labs had so drastically improved that the Hashimoto’s was completely reversed. All psoriasis faded away, and to her delight and extreme relief, her hairstylist informed her that small baby hairs had started to fill back in.

Coming out on the other side of this experience left Elaine with an unshakeable belief in the profound interconnectedness of health and beauty. And so she launched Elaine Wellness with collagen, not only because it played such an important role in her healing, but because it serves as a potent reminder that small changes in our diet can be completely life-changing.

Elaine has worked in the wellness industry as a Certified Pilates Instructor for the past 16 years. Nine years ago she developed Hashimoto’s and guttate psoriasis which took her on a health journey of finding the answers to put her autoimmune illnesses into remission. Radically changing her diet reversed her symptoms of fatigue, weight gain, hair loss, and dry skin.

Supplementing with collagen gave her a whole new head of hair and glowing skin. Coming out on the other side of this gave her an unshakable belief in the profound interconnectedness of health and beauty. In 2015 she launched a collagen water with no previous beverage industry experience. In 2019 she relaunched with powdered collagen under the new name, Elaine Wellness.

In 2022 she launched The Midlife Blueprint, a program to help women in perimenopause and menopause understand the intersection of food, exercise, and mindset and how they can thrive in midlife. Empowering women to understand how they can care for their bodies during this powerful transition is Elaine's passion.

Michaela Clauss is a California native, born and raised in Lake Tahoe. She is an accomplished Personal Chef, Nutritionist, and Owner of, Cleverly Nourished. She writes monthly recipes for Elaine Wellness with creative and inspiring ways to use collagen.

She earned her Bachelor of Science in Nutrition at Cal Poly in San Luis Obispo, California. Clauss has developed and taught farm-to-table cooking classes for families and children, as well as, nutrition and healthy lifestyle education programs for newly migrated mothers in low socioeconomic areas for The Center for Solutions Through Research in Diet and Exercise(STRIDE). She was also the Project Coordinator for STRIDE’s Family Health Research department researching healthy lifestyle programs for families in the time surrounding pregnancy.

Upon relocating to the Bay Area she managed a cooking school where she organized and executed weekly cooking classes and corporate team-building events for many local and Fortune 500 companies in Silicon Valley. Then making a shift back to her nutrition roots she opened her own nutrition-focused Personal Chef business, Cleverly Nourished.

Michaela now lives in Kelseyville, CA, and has a 2-year-old son and baby on the way. She's usually in the kitchen, but when she's not she's cuddling her animals, getting a workout in, or traveling to visit family and getting back to her small-town roots.

You must be signed in as a media user to from Elaine Wellness and interact with hundreds of other media-ready brands.