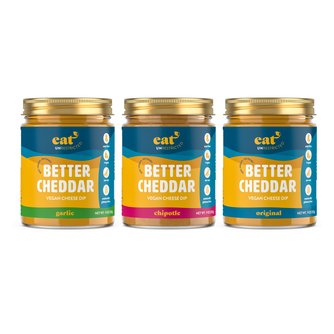 Eat UNrestricted is on a mission to bring inclusivity to the dinner table. They make foods that taste amazing and are accessible to most diets - whether you're vegan, were born with a nut allergy, or you're paying more attention to your health. Eating together, unrestricted, is one of the bedrocks of the community, and foods like UNrestricted's vegan, allergy-friendly, Better Cheddar Cheese Dip make this possible in an era where dietary restrictions are getting more common.

Eat. Unrestricted. Is their name, their motto, and their mission.

Dianna transitioned to a vegan diet after her father was diagnosed with stage 4 cancer. His progression slowed after incorporating more plant-based foods into his diet but he still passed away May 2017.

Both of of her parents have history of cancer and it has inspired her to make the change to a vegan diet June 2016. However, she couldn’t help but feel that if plant-based foods were more accessible and tasty then it could have potentially saved her father's life and many other people's life that were in a similar situation

After Dianna graduated from Georgia Institute of Technology with a B.S. in electrical engineering in 2019, she wanted to solve the problem around food exclusion due to dietary restrictions. Dianna started running vegan dinners for those in the Atlanta community that had intense food allergies or unique dietary restrictions which resulted in creating a unique space for individuals to eat together, feel safe, and network. These dinners were the launchpad for our company, Eat Unrestricted. Their flagship Better Cheddar dip is soy-free, naturally gluten-free, nut-free, clean labeled, and delicious.

You must be signed in as a media user to .
Sign Up today to interact with Eat UNrestricted and hundreds of other media-ready brands.