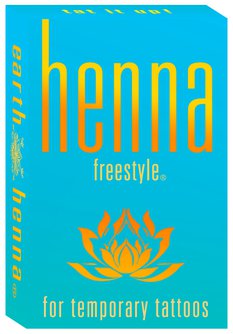 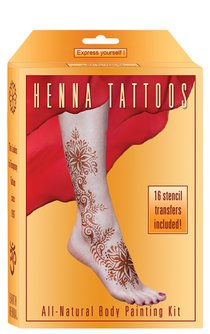 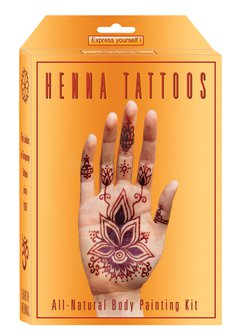 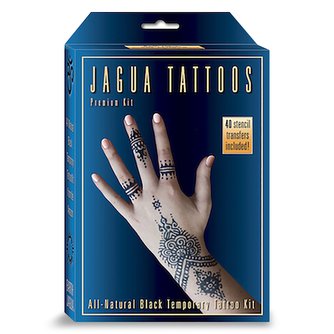 For over twenty years, Earth Henna has been sharing their temporary tattoo kits for all types of celebrations. These easy-to-use kits provide everything necessary to create safe and beautiful tattoos that will last ten days or up to four weeks. Pre-measured ingredients and stencil sheets included in each kit help to create intricate henna designs in just minutes. Earth Henna kits are dermatologically tested, vegan, cruelty free and made of high-quality materials sourced from Moroccan farmers and indigenous Matsés people in the Peruvian Amazon. Their henna paste lasts four weeks while the jagua is a blue-black paste that lasts ten days to two weeks. Earth Henna offers four different henna and jagua kits for any type of occasion.

Earth Henna’s experience over two decades and their knowledge of the intricacies of henna tattoos, finding the best color and the pitfalls of using natural products, has led them to become leaders in the space. Earth Henna works with artists, resorts, spas, parks and fairs, and a portion of every superior kit sale goes toward helping Earth Henna’s supplier partners. Not only do they follow fair-trade practices, they believe in global community as well.

Twenty three years ago, the owners of Earth Henna introduced temporary henna tattoos to the west coast when they opened the first henna studio in the US right in West Hollywood, California. When co-owner Carine Fabius wrote her book, Mehndi, The Art of Henna Body Painting (the first book on henna in the US), within two months people were lined up to get their temporary tattoos. It was then they discovered people wanted a home-use kit, so they decided to create one.

Within one year, Fabius and her husband and business partner, Pascal Giacomini closed the henna studio to focus on manufacturing and selling their first henna tattoo kit, the Earth Henna Body Painting Kit, which, along with their entire line of kits, is still hugely popular today. To create their first kit, they traveled to Morocco where they contracted with a family of Berber farmers, whose entire harvest of henna powder they bought each year. Once harvested, the head of the family would bring the henna shipment by donkey to Marrakech for shipment to Los Angeles. The family was very poor, and Fabius and Giacomini gave back to them by funding the digging of a well when the beginnings of climate change dried up the water supply on the farm. Communication was a constant challenge as they had no cell phones and the only way to do it was when the family’s youngest son was able to get to an internet café to make contact.

After they launched the Classic Kit, consumer demand for a temporary tattoo that looks like a real tattoo was on the rise. Fabius heard about the jagua fruit, which grows in the Amazon jungle. The juice of the fruit stains the skin a blue/black color that lasts two weeks. Giacomini immediately signed up to travel to the Amazon to meet and partner with a tribe called the Matsés, who harvest the fruit. They agreed to ship the juice to Los Angeles. The otherwise underserved Indians now have a way to earn a living, and it’s important to Fabius and Pascal that they contribute annually to malaria and other healthcare needs in their community. 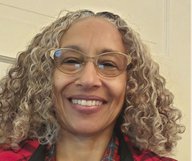 In 1997, Fabius was asked to host a photography exhibition of henna body painting, a trend that had just taken hold in New York. At the time, Fabius and Pascal were running a well known art gallery of contemporary Haitian and ethnic art, in Hollywood. Even though henna body painting didn’t fit their gallery’s profile, she decided to visit New York to see it for herself. Fabius immediately knew something magical was in the air. Drawn on the gallery floor with chalk were henna tattoo designs that were dead ringers for the beautiful Haitian symbols representing the various gods and goddesses of the Vodou religion.

Six months later, they opened Earth Henna, the first henna body painting studio in the United States, in the process, helping to jumpstart the global trend of temporary henna tattoos. Heavy media attention followed, and after a couple of months, Fabius was contacted by Random House, who published her book, Mehndi, The Art of Henna Body Painting - the first book on henna in the United States.

Today, Fabius (who goes by she) and her husband (he) run both Galerie Lakaye, which regularly hosts changing exhibitions of Haitian art, and Earth Henna, which manufactures their line of temporary tattoo kits. Fabius also spends an equal amount of time writing fiction and non-fiction books, works as a freelance curator for museums throughout Southern California, and was a regular blogger for 10 years on HuffPost until 2018 when they shut down their blogger platform. She is the author of six books. Her most recent book, Short Stories About Us, was published in June 2019.

Daily Mom - Mar 10, 2022 16 Fantastic Organic Beauty Products For Natural Care ""Tattoos are cool, but they are serious money and lifelong commitment. The last thing you probably want is a regrettable reminder of a really bad season in your life! However, what if you could have all the fun of a tattoo without the ‘oops, shouldn’t have done that,’ commitment? Now you can with Earth Henna’s Premium Kit.""
Trendhunter - Aug 03, 2021 Earth Henna Celebrates 20 Years of Business With its Freestyle Classic Kit
Veg News - Jul 01, 2018 Festival Chic
Elle UK - Mar 03, 2017 14 Glitter Henna Designs Giving Us Serious Sparkle Envy

You must be signed in as a media user to .
Sign Up today to interact with Earth Henna and hundreds of other media-ready brands.