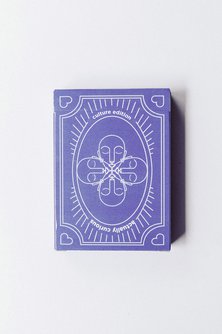 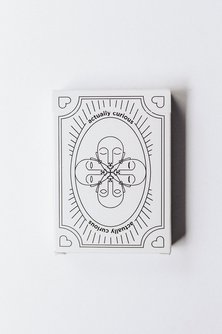 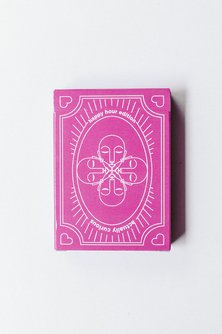 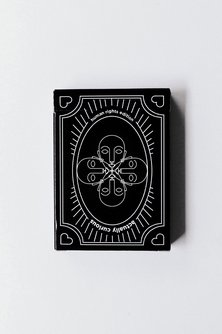 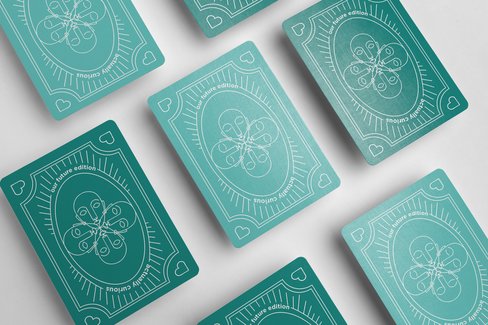 Nothing builds bonds more than being seen and feeling heard. Actually Curious is a card game that brings people closer together, using the science and psychology of emotional connection to teach tools of active listening and empathy. The game was created in 2018 by Curiosity Lab, a marketing company built on the idea that we can make a real difference in the world by accelerating demand within the purpose economy.

Drawing references from psychologists, journalists, crisis negotiators, game developers, friends and family, the game teaches the tools of having conversations with empathy. Playing a fun and competitive card game is a sneakily effective way of disarming the defenses and getting into important topics.

Actually Curious card sets take a new approach to game night with family & friends, intentional dating, conversation starters and even journal practices & prompts! Thirsty for more? The Actually Curious team curates "Empathy Workouts" to strengthen your empathy muscles every Sunday for virtual talks, and game night-style workshops on themes that deepen empathy for self and others, while helping set meaningful intentions for the week ahead.

Today, Founder and CEO of Curiosity Lab, Michael Tennant, is an award-winning media, advertising, and nonprofit veteran for companies like MTV, VICE Media, P&G, CocaCola, and more. However, early in his career, Michael struggled to find advocates and mentors that looked like him and cared to guide him during those early days. It is this lack of representation and mentorship that inspired his commitment to bringing opportunities to underserved communities, and a long term ambition to build a thriving integrated products, media, and services business, from communities of color and intended to unite the world.

After the consecutive loss of his two brothers, this ambition led him to leave the corporate world and embark on a road trip across the US, eventually to create Actually Curious, a card game designed to bring people together. Nothing builds bonds more than being seen and feeling heard, and Actually Curious is the only party game that uses the science and psychology of emotional connection.

The game was initially created in 2018 as a tool to help fight divisiveness in this country. It’s become a viral hit this past year as a game that spreads empathy, and has been featured on Beyoncé’s Black Parade Business list, the New York Times and the TODAY show.

Michael Tennant is the Founder and CEO of Curiosity Lab, a firm that helps organizations build community around their brands, by clearly articulating their purpose and bringing it to life through content, partnership and experiences. In his role, Michael helps values-aligned organizations grow by providing short-term and long-term growth consulting and strategy.

Michael most recently served as the Head of Branded Content in the US for PHD Media, where he helped the agency win Ad Age’s 2017 Media Agency of the Year, leading content strategy and execution for brands like Google, Delta Airlines, and the Volkswagen portfolio. Prior to that, he led branded content for the CocaCola company and various brands in the P&G portfolio. Michael began his career in youth entertainment where he held various content, marketing and brand partnership roles for MTV and VICE.

In January of 2021, Michael accepted a position as "Entrepreneur in Residence" at Arnold + Havas where he will conduct cultural workshops with all A+HMB leaders and employees with a focus on empathy, collaboration and communication. By applying Curiosity Lab’s proprietary processes and workshops, Tennant will leverage his expertise in empathy to help enable the people of Arnold + Havas Media to create even more effective and inclusive work for clients.

Esquire - Nov 29, 2022 70 Best Gifts For Men Who (Seemingly) Have Everything "He might own a lot of things, but there's no way he owns these things."
Forbes - Nov 14, 2022 Holiday Gift Guide 2022: The Most Stylish And Travel-Friendly Stocking Stuffers Under $50 "When carefully considered, stocking stuffers have the potential to outshine big-ticket presents. So let this curated guide of 15 giftables gently priced under $50 come to the rescue this holiday season."
The Everymom - Nov 01, 2022 The Best Holiday Gifts for Mom Friends "Mom friends are something special. You can commiserate about the hard stuff and celebrate the little motherhood victories no one else appreciates."
The Strategist - Oct 20, 2022 The Best Secret Santa Gifts Under $25 (That You Can Buy on Amazon) "Secret Santa exchanges should, in theory, be a lot of fun, because who doesn’t like getting presents? But drawing the name of someone whose interests you barely know — or someone you really want to impress (e.g., the big boss) — can pose a daunting gifting challenge."
Esquire - Oct 14, 2022 60 Best Gifts For Men Who Seemingly Have Everything "Everyone knows that one guy in their life who's truly exceptional and one-of-the-kind. He has uncanny yarn teed up in his sleeve at every gathering, wields the coolest gadget or gizmo to show off at every meet-up, drips the latest runway picks at every public appearance."
Byrdie - Oct 03, 2022 We Found the Best 30 Stocking Stuffers for Women of 2022
MindBodyGreen - Sep 10, 2022 A Sex TherapistShopping List For A More Interesting Date Night "A movie and dinner. A show and drinks. Drinks and appetizers. A walk in the park. A movie night in with snuggles and take out."
HYPEBAE - Apr 01, 2021 ACTUALLY CURIOUS IS A CARD GAME DESIGNED TO BRING PEOPLE TOGETHER
Refinery 29 - Dec 10, 2020 Gifts that Will Blow Your Crush Away
The TODAY Show - Dec 10, 2020 How The Actually Curious Card Game Makes Empathy Accessible
Who What Wear - Nov 25, 2020 The Top 10 Gifts Our Editors are Thrilled to Give the Year
The New York Times - Oct 16, 2020 How an Empathy Expert Spends his Sundays
Ad Age - Sep 10, 2020 Uncomfortable Conversations: How a card game helped this exec realize what change looks like

Actually Curious
A card game and a movement to spread empathy

You must be signed in as a media user to .
Sign Up today to interact with Actually Curious and hundreds of other media-ready brands.